Mary Poppins Would Want You to Use Electronic Stock Certificates

In the original Mary Poppins movie, the title character tells a young Michael and Jane Banks, who need to clean their nursery, that, “in every job that must be done, there is an element of fun.” Then, as they sing “A Spoonful of Sugar”, she makes said cleanup look downright whimsical. At Shoobx, we think keeping startup documents and processes organized is lots of fun, but we appreciate that many founders would react to that sentiment in a similar fashion to Michael and Jane. So one might be tempted to say the connections between Mary Poppins and her carpet bag of tricks and Shoobx are flimsy at best—that is, until that person sees Mary Poppins Returns.

As the new movie unfolds, we meet a grown Michael Banks, who has three small children, and who sadly lost his wife during the previous year. To cover expenses, he’s given up his work as an artist and become a bank teller at Fidelity Fiduciary Bank, where his father was a partner. He’s also taken out a loan from the bank—a loan whose payments are so far behind that it must be repaid by Friday or the Banks’ home will be repossessed. Michael and Jane remember that their father left them shares in the bank that are valuable enough to cover the loan, but alas, neither can seem to locate the stock certificate, so they have no way to prove they own the shares and pay back the loan. Thus, against the backdrop of Mary Poppins’ magic and joyous dance numbers, the search for the missing stock certificate builds dramatic tension for the beleaguered Banks family.

As we’ve written, companies have flexibility in how they want to provide their stockholders with evidence of ownership of their shares. Unlike a $20 bill, the stock certificate itself isn’t a valuable item. Rather, it’s evidence that the holder owns the shares referred to by the certificate. As long as a company complies with applicable legal requirements (such as Delaware’s rules stating certificates must include the company name, the number of shares, and bear the signatures of two officers), it’s free to decide that it will only issue electronic stock certificates to its stockholders.

We’ve come a long way since 1930’s London, and as startups have become more accustomed to using software to manage things like equity, HR, and documents generally, the choice to use electronic stock certificates has become more common too. The benefits are clear, such as having an easy, transparent record that won’t get lost or used as a plot device in your own family musical, and founders are increasingly choosing this approach as they begin issuing shares to their teams, board members, and investors. We think Mary Poppins would be pleased with the decision—perhaps she’d even say it’s “practically perfect in every way!”

Looking to avoid the snafus of the Banks family for your company? Learn more about equity management on Shoobx. 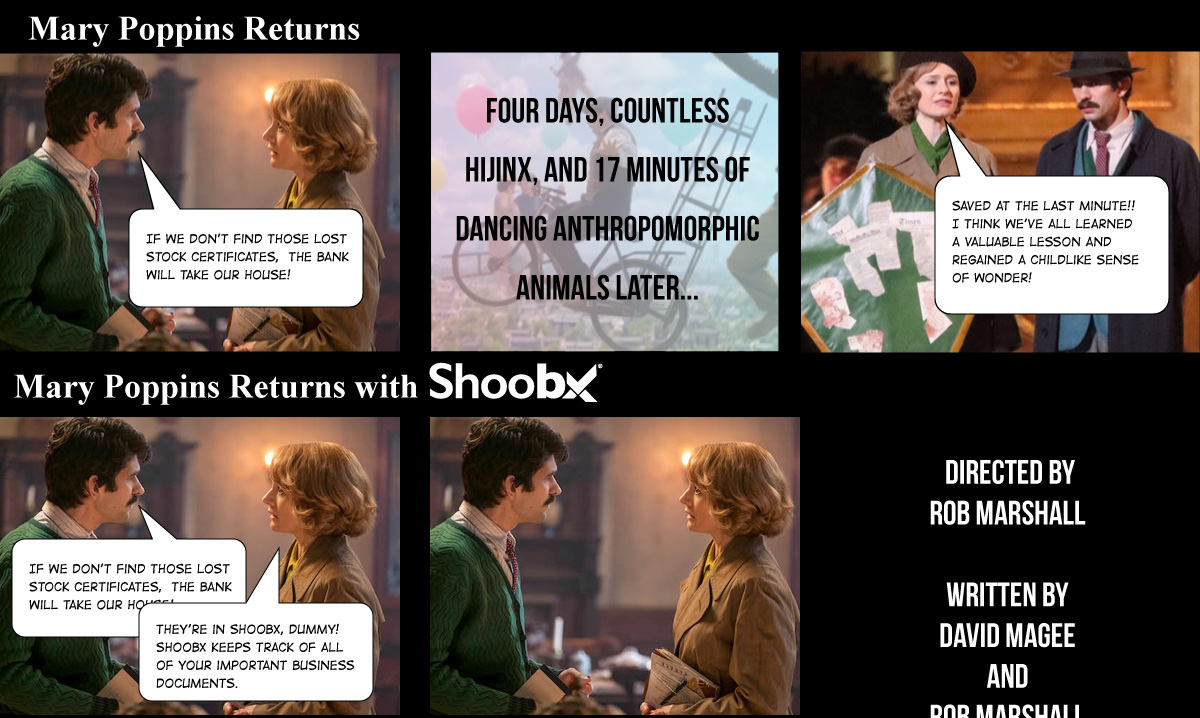