Crovax, the Destroyer, struggled to free himself from the tongue of the giant frog. Between the slimy pink ropes, he could see his companions were unconscious and surrounded by Sahuagin warriors. They were mighty berserkers from the Bone-Tree clan! How were they so easily defeated?!

"Why?" Crovax shouted to the gods, "Why didn't anyone play a healer?!"

Or rather my frustrated son shouted it, not so much to the gods as to the other tweens around the card table.

Across the room I was reading an article on entrepreneurship. I had a revelation; The secret to selecting the perfect founding team was the SAME as the key to picking the perfect party in Dungeons & Dragons.

The Class Guide for Creating the Perfect Team

In Dungeons & Dragons, before stepping into the great unknown new players must create their character. The first and perhaps most important decision is your character’s class, or background. Are you a barbarian or a bard? A ranger or a rogue? Over the last decade, I’ve been lucky enough to consistently work with startups Monday through Friday and save the world from frost giants and eldritch gods on the weekends. I’ve been amazed at how often I see the same archetypes of personality and skill at play in both startups and role playing games. Starting a company is a perilous adventure. It helps to know the strengths of you and your team. Below are some Entrepreneurial Classes. Which class of startup hero are you? 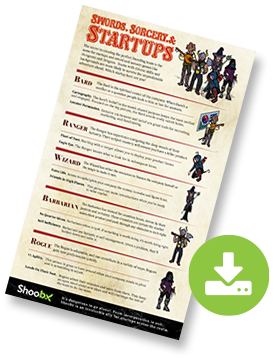 A Balanced Party is a Happy Party

It’s impossible to overstate the importance of your founding team’s balance of skills. As Steve Jobs remarked, “when you’re in a startup, the first ten people will determine whether the company succeeds.”

Return with me to my son's ill-fated D&D adventure. He was playing a hulking barbarian. His friends were the feared half-orc twins Thundarr and Grolka. Each could break a spear like a toothpick. How were they so easily defeated? Their skills overlapped, creating redundancies. Even worse were the gaps in crucial skills like healing and spellcasting. You don’t see many successful adventuring parties made up entirely of book-wielding clerics, just as you don’t see many successful startup teams who all have the same set of talents and experience.

Early recruiting (especially picking a co-founder) should focus on balancing out the skills the rest of the team is lacking. Diversity is important in creating a balanced party. Even if your team has a broad array of technical skills, if everyone has similar experiences they may fail to see the right solution. Whether you’re the startup equivalent of a dedicated ranger or an inspirational bard, it can be easy to wind up in an echo-chamber. But when your party finds itself toe to toe with the dangers facing new businesses you’ll need a talented, balanced team to survive.